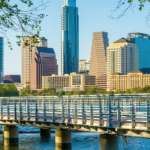 Often perceived as socially drab lawmaking centers, many state capitals actually are thriving hubs of activity and thus some of the most livable places in America. But not all state capitals are created equal. And though 17 of them are the largest cities in their states, the biggest population doesn’t always represent the best quality of life.

So in order to determine what state capitals are worth, WalletHub’s data team compared all 50 across 42 key indicators of affordability, economic strength, quality of education and health, and overall living standards. Our data set ranges from “cost of living” to “K–12 school-system quality” to “number of attractions.” Read on for our findings, expert insight from a panel of researchers and a full description of our methodology.

Living in a state capital offers many perks, but there are tradeoffs as well. For additional insight, we asked a panel of experts to weigh in with their thoughts on the following key questions:

Professor of Sociology at The University of Illinois at Urbana-Champaign

Capital cities are hubs for culture, history, education, and civic activities.As such, they can provide vibrant and innovative places to live.Job opportunities in state capitals attract more highly educated workers than surrounding regions, which also contributes to the city’s intellectual capital.

On average, the cost of living in capital cities tends to be higher than surrounding regions, which can be a drawback.They are also marked by a relatively high population turnover rate, with many residents in residence for only a few years. Smaller capital cities can suffer from a lack of economic diversification, leading to over dependence upon government related firms and businesses.As well, over reliance upon government can diminish economic resilience.

Many argue that having the largest city in the state serve as the capital can serve the state well. Large cities tend to host large media markets, with numerous media outlets enabling clear and comprehensive coverage of state political news. Large cities augment the cultural, civic and historical resources of capital cities. However, placing the capital city in the largest city can lead to an over concentration of resources, perceptions of undue influence of the city’s industries and financial interests on State government, and the marginalization of rural residents of the state.

All other things equal, there is little general support for assuming residents of capital cities are more politically engaged.While residents may have more opportunities to interact informally with government representatives (lessening social distance), this is only true when government officials spend time in the capital or establish residence. Capital cities tend to attract young, educated inhabitants, and these people tend to be more politically active.At the same time, many local residents may be dependent upon state agencies/state government for employment, which can dampen activism.

This really depends on the type of state capital you live in. For instance, some state capitals are in very large, economically diversified cities. A couple good example of this type of city are Phoenix, AZ and Atlanta, GA. That can be contrasted with smaller cities like Harrisburg, PA and Lansing, MI. There are a lot of possibilities in terms of large, medium and small cities. Being in a state capital usually means that you have access to a lot of amenities that you find in larger metropolitan areas, and that you live in a large media market. Even in the case of smaller cities that are homes to state capitals, there is usually a large university and medical center located nearby. So, state capitals tend to offer access to educational resources, quality healthcare, technology, recreational amenities, and they are homes to relatively well educated and skilled professionals who work in government and the sectors mentioned above.

It is a two-way street. State government benefits from having access to all of the other businesses, organizations and resources that larger cities have to offer. There are also more urban amenities to attract and retain a professional workforce. At the same time, surrounding industries have more direct access to policymakers and benefit from the added visibility that proximity gives them. There are incentives for state government to attempt to address urban problems and improve the quality of life when the state capital is in a large urban center. A good contrast is Denver, CO and Detroit, MI. Obviously, there are other factors that contribute to the vitality of Denver versus Detroit, but having the state capital located in the heart of Denver increases the visibility of issues related to urban development and revitalization to the elected officials who navigate the city’s streets on a daily basis. In contrast, Detroiters do not benefit from that type of proximity to policy-makers.

A lot of the things that serve as indicators are characteristic of any city with a high quality of life. They may include: a robust economy characterized by growth and high-skilled jobs, quality K-12 schools, the presence of colleges and universities, a quality health care system, and a vibrant cultural and recreational environment. A couple good example of state capitals that scores high on these indicators are Austin, TX and Madison, WI.

However, the ability to maintain the quality of life in a state capital can change over time. For instance, Nashville, TN checks most of the boxes mentioned above, but its recent growth has made it more challenging to remain an affordable city with high quality services.

This really depends on the size of the city and other elements of its tax-base. Smaller state capitals probably struggle with this issue more than larger ones. But, there are trade-offs. For instance, the exemption of public sector buildings from the tax rolls may reduce local revenues, but the presence of a more professional workforce will increase revenue in other areas, like local sales taxes. Also, state workers tend to have middle-class incomes, buy homes and pay property taxes, help stabilize neighborhoods, and contribute to the tax-base in other ways. State capitals also add entail revenue from tourism, individuals visiting the state capital to conduct official business, and spending on the maintenance and upkeep of government property.

Associate Professor of Economics at Washburn University School of Business

State government is also analogous to an exporting (or primary) industry as it provides administrative services to all residents of the state. This draws economic activity into the local economy from tax dollars of other state residents, as a disproportionate share of economic spending on the administrative portion of government budgets will take place in state capitals. The drawback to this, of course, is that when the state government is reducing employment and spending on its administrative functions (like we’ve done here in Kansas), the state capital’s economy will be harmed more than in other portions of the state. Statewide, lower government spending is offset by more spending in the private sector as taxes fall. But in state capitals the decrease in government spending in the local economy will overwhelm any increase in private spending via lower taxes. The reverse of course happens when states are increasing spending on administrative functions.

As you mention with your follow-up question, another big drawback is the large amount of government property that is exempt from property taxes. State offices are often located in central areas with higher property value per acre. So it puts pressure on local governments and school districts to fund services while having a big portion of its tax base exempt. The needs of local schools and municipal services are just as large when serving residents employed by a government bureaucracy, as when they are employed by a private business. But the private business pays property and business taxes, whereas and the bureaucracy does not.

Another benefit of being a state capital is that state legislators (even though being from outside the area) probably feel a stronger connection to the local community, since they spend a significant amount of time there. This probably helps the local area garner support from the legislature for policy that are of local importance. Being a state capital also probably draws in a higher proportion of educated workers.

The pros of having a state capital in the biggest city is that the larger labor pool in big cities is beneficial to both the state government’s ability to find the most qualified workers. The large labor market is also beneficial to potential workers as it lowers the search cost for government workers who may want to switch jobs or for the spouses of government workers in two-worker households.

A drawback to being in the largest city is that it may make the residents of rural and secondary cities to feel even more dismissed by the larger, more economically prominent city.

As for the best state capitals to live in, I would use the same indicators that you would use for cities that are not state capitals. I guess you could add a measure for volatility of state government employment in the metropolitan area (standard deviation of state government employment). Otherwise it would be things like poverty rate, quality of local schools, crime rate, unemployment rate etc.

I do think residents of state capitals are more likely to be politically engaged. Employees of government agencies and legislators are likely to be very attuned to the political issues in the state. As such, friends and family members of these workers will become more exposed to these issues through their personal interactions with state employees. Information flows through personal contacts like a virus. So invariably state capitals will have a more politically engaged population.

In order to identify the best state capitals to live in, WalletHub’s analysts compared all 50 across four key dimensions: 1) Affordability, 2) Economic Well-Being, 3) Quality of Education & Health and 4) Quality of Life.

We evaluated those dimensions using compiled 42 relevant metrics, which are listed below with their corresponding weights. Each metric was graded on a 100-point scale, with a score of 100 representing the most livable state capital.

We then calculated a “State Capital Index” for each state capital based on its weighted average across all metrics and used the resulting indexes to construct our final ranking.