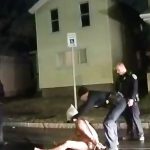 Black Man Died of Suffocation After Officers Put Hood on Him

Relatives of the man, Daniel Prude, said the police officers involved in his death in March in Rochester, N.Y., should be charged with murder.

Read the full article from The New York Times, here.

“A Black man died of suffocation in Rochester, N.Y., after police officers who were taking him into custody put a hood over his head and then pressed his face into the pavement for two minutes, according to video and records released by his family and local activists on Wednesday. The man, Daniel Prude, 41, died on March 30, seven days after his encounter with the police, after being removed from life support, his family said.”