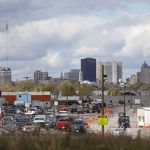 Buffalo’s New Zoning Code Promotes Density, But Is It for Everyone?

Buffalo’s New Zoning Code Promotes Density, But Is It for Everyone?

The Buffalo skyline is seen beyond construction work in October 2015. (AP Photo/Mike Groll)

Re-Post From Next City

Buffalo, New York’s new citywide, form-based zoning code has every buzzword an urbanist could hope for: Signed into law by Mayor Byron Brown on Tuesday, the Green Code promotes walkability, density, mixed-use development and complete streets redesigns. It preserves the character of the city’s historic neighborhoods, while calling for diversity and affordability. It even eliminates mandatory parking minimums, making Buffalo the first major city in the U.S. to do so. It’s the city’s first comprehensive zoning update since 1953.

“Every word that an urbanist would want to see in this plan is there except equity,” says Henry Louis Taylor Jr., director of the University of Buffalo’s Center for Urban Studies. A shrinking city, Buffalo has lost 55 percent of its population over the past 85 years and has continued to see more modest population declines over the past decade. As a result, says Taylor, “there’s a tremendous amount of unevenness in the development of the central city itself.”

Taylor thinks the Green Code, in focusing on promoting development while preserving historic character, does little to address that unevenness. Brendan Mehaffy, executive director of Buffalo’s Office of Strategic Planning, says while the word “equity” itself might be missing from the plan, the Green Code nonetheless foregrounds the needs of low-income residents and neighborhoods by allowing for more public input in public projects, promoting active transportation and more. The Green Code actually represents an overhaul of many of the city’s policies and standards, from a land use plan to a unified development ordinance to a simplification of the city’s many urban renewal programs into a single one that will facilitate selling and rehabbing vacant and abandoned properties. Next up is a housing opportunity strategy that will modify how the city finances affordable housing and may include a provision on inclusionary zoning.

Part of what makes the Green Code stand out is the use of a form-based code. In contrast with traditional zoning regulation, form-based codes aim to create more harmonious relationships between different parts of the urban fabric. Instead of trying to separate uses like residential and light industrial, form-based codes focus on regulating the look, feel and function of urban space as a whole — requiring commercial spaces to have ground-level windows, setting standards for building heights and setbacks, etc. — policies that also promote more human-scale, pedestrian-friendly neighborhoods. Buffalo is only the third city, after Miami and Denver, to adopt a citywide form-based code. Many cities apply them exclusively to downtown areas or other mixed-use districts.

Mehaffy says the new code was necessitated in part by a desire to drive growth to areas that can support it and in part by residents’ discomfort with new construction that didn’t fit the city’s historic character. According to Mehaffy, developers of new buildings often found themselves saying, “We did comply with the rules under the old zoning code but created a product that the neighborhood could not embrace and did not support, and that created neighborhood conflict.”

So the city held over 242 public meetings over six years to develop the Green Code. Mehaffy says in that process “Buffalo, only better” became a rallying cry for some of the 6,000 residents who attended meetings. When people said they loved their neighborhoods, the city responded by trying to measure what they loved and preserve it in the code.

The elimination of parking minimums, of course, elicited the most feverish response in urbanist circles this week. The Green Code does away with minimum requirements for parking spots in new projects, replacing the formulaic approach with a transportation demand management process that also takes into account whether a project is situated on transit lines, bike paths and other modes of transportation.

“There was massive support for the elimination of parking minimums. The conversation really focused around doing it responsibly,” says Mehaffy. That meant ensuring developers don’t just push the responsibility to build more parking onto the city and taxpayers. For future projects, the planning board will take into account the parking situation before determining whether developers need to build spots and how many.

Mary Madden, a board member of the Form-Based Codes Institute and a principle at D.C.- and Pennsylvania-based urban design firm Ferrell Madden, says she often encourages her client cities to do away with or reduce parking minimums, but most don’t embrace the concept as easily as Buffalo has. The unified development ordinance also gets into the nitty-gritty of building design for different neighborhood types. Madden says form-based codes often promote more sustainable design because they encourage small-lot buildings that can be adapted for different uses in the future, rather than highly specialized construction like big-box stores. The Green Code also streamlines development standards in a bid to attract more investment to areas already primed with infrastructure, strives to identify a walkable corridor in every neighborhood, creates clearer language around solar panels, and legalizes urban farming, which was previously not allowed.

“It really was updating how we saw ourselves as a city,” says Mehaffy. “We are updating to reflect current values.”

But Taylor worries that the Green Code skirts elements of the city’s past, and in particular the race- and class-related patterns of investment that have shaped what’s there now. Within the different types of neighborhoods identified by the code, the new zoning regulations are uniform, but investment has not historically been even across wealthier and lower-income neighborhoods, says Taylor. “The Green Code is a good code, it’s a good tool. It has all of the right elements that are involved in it,” he says. “The problem with the code is not with the code. The problem is with the strategies that have been connected to the code, and it will recreate the unjust city.”

As Madden cautions, “if you have no market […] a form-based code is not going to give you a market.”

Taylor characterizes the development concerns highlighted by Mehaffy above as worries of what he calls the “latte class,” the largely white, upwardly mobile urbanites living in the city’s flourishing neighborhoods being targeted for development. It’s a different story in the eastern parts of the city, where Buffalo’s black residents are concentrated and vacant lots and abandoned buildings still reign. (Part of the Green Code creates a new system for addressing the city’s surplus of vacant and abandoned property.) Taylor believes the Green Code is a step in the right direction, that with some tweaking it can help usher in a more just city, but that it’s built on the same assumptions and set of values that have contributed to the unequal development that exists today.

“On the surface the Green Code celebrates [inclusivity and affordability], but at the same time it has a form of development operating within the context of a commodity-based housing and commercial development strategy that creates exclusiveness,” he says. “And it creates a kind of latte cultural imperialism that freezes out other forms of culture.”

Mehaffy says inclusivity is crucial to the Green Code, and that the housing opportunity strategy to come will more explicitly tackle the financial aspects of affordable housing — determining whether inclusionary zoning is the best tool for Buffalo, and finding ways to use state and local funds to create sustainable, inclusive, mixed-income neighborhoods.

Reservations and all, Taylor says, “There’s a growing mass of us that know how to use [the Green Code] to build a truly vibrant and prosperous and just city and that’s our agenda for the 21st century and the upcoming year. I think that’s a positive, positive step, because 10 years ago we didn’t have that knowledge, that information and that insight, but today we do.”