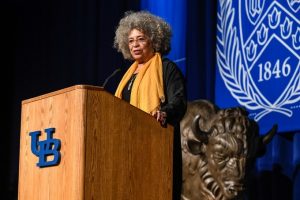 “We stand in solidarity with struggling peoples all over the word. That is the message that Dr. King left us regarding the end of visibility of justice.”

Political activist Angela Davis celebrated the legacy of Martin Luther King Jr. and spoke about social justice issues throughout the world before a large audience in Alumni Arena Wednesday night during an appearance as part of UB’s Distinguished Speakers Series.

Throughout her talk, Davis touched on many social justice issues, among them Palestinian independence, the plight of the Rohingya people and the political landscape regarding immigration in the U.S. She began by acknowledging the indigenous people who lived in the Buffalo area long before UB and the city of Buffalo existed.

“I understand that the university and the city are situated on the land of the Haudenosaunee,” Davis said. “I think it’s important to begin any formal gathering by acknowledging the fact that we are on colonized land and that we have not yet adequately addressed the consequences of the original genocidal violence inflicted on the first people of this continent.”

“We celebrate Dr. King each year, not only because we are determined to keep his dream of justice, equality and freedom alive, but because it is essential to our own collective health that we recognize that Dr. King symbolizes the contributions of untold numbers of people, without whom the freedom movement would not have occurred,” Davis said.

She said King was special because he relied on the help of those around him to create social and political change. He was not a man above anyone else, she said, and instead served merely as a prominent figurehead for the American civil rights movement.

“Everyone has the potential to become an agent of change,” Davis said. “Let us not look up to Dr. King as a man who towered so far above us that we cannot imagine achieving his heights; he was who he was because there were many standing with him who organized the movement while he served as its public face.

“(Dr. King’s) greatness resided precisely in his capacity to recognize the contributions of masses of people.”

Davis also spoke of her upbringing in Birmingham, Alabama, and her efforts as a leading figure in the civil rights movement. At one point, she painted a picture of her childhood by telling how she resisted with her friends from the Dynamite Hill neighborhood on Center Street, which was racially segregated on each side.

“We knew that we were not allowed as black children to be on the other side of the street, so we developed a whole series of games where we would dare each other to run across the street, knowing full well that our actions were literally against the law,” she said. “Those of us who were feeling bold would run across the street, run up the steps of a white person’s house, ring their doorbell and try to run back across the street before they answered the door. We learned early on that resistance can be fun.” 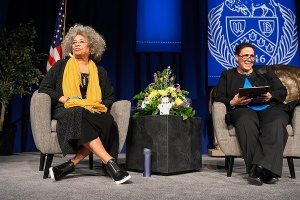 Speaking specifically to racism and how it’s portrayed in the media and daily conversation, Davis said not enough attention is given to structural barriers that ensure racism’s prevalence.

“If we are serious about beginning to do the work of abolishing racism, our vision cannot be so confined to simplistic notions of what it means to challenge racism,” she said. “We often focus on the spectacular examples, like blackface. Yeah, blackface is important and it’s been around for a long time, but we like to focus on these spectacular moments, rather than everyday racism and the structures of racism.”

Davis then criticized the current landscape of the debate on immigration in the U.S. She said anyone who lives on Earth cannot be considered an outsider, especially if the current place where they live is uninhabitable.

“We communicate instantaneously over thousands of miles; information is directly transmitted over national borders; capital is transferred from one continent to another in the few seconds it takes for keystrokes on a computer. But, when people join this flow, particularly when their homelands have been rendered uninhabitable, they are criminalized and cheated.”

She tied these beliefs to King’s legacy, noting he stood for all struggling people throughout the world, whether they were from the United States or not.

“If we see anti-racism within an intersectional framework, our struggles go beyond the geographical area we know as the United States. Our efforts need to acknowledge what is happening in Brazil, occupied Palestine, France or Myanmar. We stand in solidarity with struggling peoples all over the word. That is the message that Dr. King left us regarding the end of visibility of justice.”

Finally, she concluded this sentiment with King’s own words from exactly one year before his assassination:

Even though she indicated that the issue of social justice throughout the world looks bleak, Davis remained optimistic as her speech came a close. She pointed to the 2018 congressional elections — in which the largest number of women in U.S. history was elected to Congress — as an example of change on the horizon. She also said there’s a brewing sense of activism that could lead to a better future.

“Despite some seriously depressing aspects about our political life at this moment, there are exciting aspects,” she said. “Generally, I think this is an exciting moment. I would think that if we combined our activism, our advocacy and our scholarship with our collective imagination, passion and desire for the purpose of extending, broadening and deepening our current movements for social justice, then we can look forward for the future that we all desire.”