Discussion targets segregation as the source of Buffalo poverty

A crowded audience in the Downtown Library last night heard about how segregation continues to restrict spreading economic prosperity to all parts of Buffalo. The town hall meeting served the opening of the 2016  Buffalo Humanities Festival 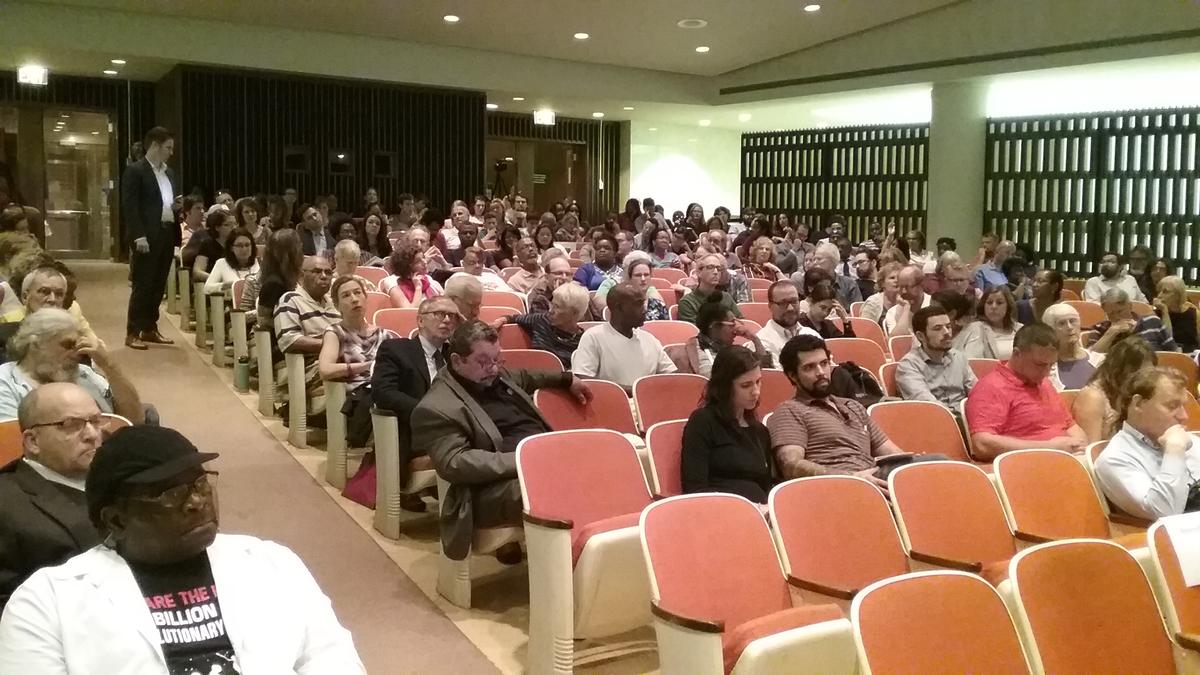 A large crowd attended Thursday night’s town hall discussion on segregation in the city of Buffalo. The Central Library served as the kickoff to the 2016 Buffalo Humanities Festival. (Credit Mike Desmond/WBFO News)

Some of the discussion focused on how zoning laws and businesses coincide to keep poor people and prosperous people in different neighborhoods. The audience was told that means poor people can’t use their housing to help create wealth for themselves and their children, as other groups can.

“Show me a place where the urban land market is functioning as it functions and I will show you a place that’s segregated,” said Henry Louis Taylor, UB professor of urban and regional planning.

“They’ll either be doing it by race. They will be doing it by class. But it will segregate because just like a hungry dog eats, the land market flips value from low to high,” said Taylor, who believes poor people have to combine and work collaboratively to turn things around. He is calling for a land bank to take over available property, giving control to residents.

“I’m tired of sitting on panels, having to discuss the benefits of real estate developers that want to come in and do what they want to do and not bring diversity for their labor force and not do that urgently and not do well what’s right for that community,” said James Giles, president and CEO of Back to Basics Outreach Ministries.

Audience members agreed that a core problem remains the poor performance of Buffalo city schools. Others sympathized with Fruit Belt residents whose quality of life is fast becoming a casualty to the growth of the adjacent Buffalo Niagara Medical Campus.

Though much of the discussion outlined a troubling reality, Professor Taylor offered a hopeful challenge.

“The battle of the 21st Century will be the battle to develop and regenerate our underdeveloped neighborhoods. So, we have to cast away our illusions and realize that it will take a struggle, a fight, to create the kind of just society that we want.”