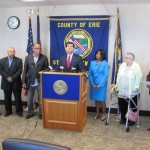 While we hear time and time again about Buffalo’s economic renaissance, there remains many living in poverty, not just in the city but throughout Erie County. A new panel of volunteers is being formed by the Erie County Executive to help address the problem.

County Executive Mark Poloncarz’s panel, named the Poverty Committee, is a re-establishment of what used to be the Welfare Advisory Board. Members of the panel, whose backgrounds include academia, clergy and not-for-profit human service providers, will voluntarily explore ways the county can take on the issue.

According to U.S. Census figures for 2014 shared by Poloncarz, 31 percent of people living in the city are living in poverty. Nearly half of the city’s children, 47 percent, also fall below the poverty line according to Census numbers.

According to the County Executive, the problem actually spans across all ethnicities, demographics and locations throughout Erie County.

“People seem to think that poverty only exists in the City of Buffalo. That is not the case,” said Poloncarz. “The current rate of poverty, as of 2014 for Erie County, held steady at 15 percent.”

The Poverty Committee will work with county agencies that work directly with at-risk citizens. They’ll work primarily with the Department of Social Services.

“The implementation of the Poverty Committee is about working with other groups and organizations. We know there are other community partners who are already engaged in this work,” said Social Services First Deputy Commissioner Marie Cannon.

Chairing the committee will be the Reverend Kinzer Pointer, pastor of Agape Fellowship Baptist Church.

“We’re going to – and we must – use our intellect, and our ability to make sure that we work smart to reduce poverty, to increase opportunities to those living in poverty, and to do that in a way that doesn’t diminish the humanity of any of our fellow citizens in Erie County,” Pointer said.