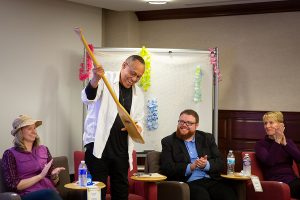 Henry Louis Taylor Jr. won the student vote and shows off his prize: a rowing oar. Taylor’s name will be added to the oar, joining those of the previous winners of the Life Raft Debate.

Imagine a worst-case parallel universe where climate change has taken an irreversible toll on the Earth. Instead of the typical weather that Buffalo has to offer, the city now suffers from 200-degree swings in temperature, forcing a small group of surviving UB students and faculty to start a new society elsewhere.

The group spends its final days on Earth developing a spacecraft that they’ll use to travel to Mars. But, when the spacecraft is finished and the survivors start boarding, a problem arises: six survivors remain with only one seat left on the spacecraft.

The ultimate question: Who — and what discipline — is worth saving?

That tough question was posed to students in attendance of the eighth annual Life Raft Debate, held Tuesday night in Capen Hall. The students heard the arguments of the six faculty members before voting on who would get the coveted final spot on the imaginary spacecraft. The event was sponsored by the University Honors College and the Experiential Learning Network.

Gardella, a SUNY Distinguished Professor in the Department of Chemistry, was the first up to argue for the final spot. He noted that chemistry was the most utilitarian of all the sciences, and that his 40 years of knowledge and experience in the field would be useful, especially for soil, air and water testing in the new society.

His presentation drew laughs from the audience when he said the only “con” to saving him was that he was old. The audience also chuckled when he mentioned that Wikipedia calls chemistry the central science, to which he sarcastically added, “So, it must be true.”

Following Gardella, Wasmoen, visiting assistant professor in the Department of English, presented a macabre argument. In his pitch to the audience, he said that although his knowledge doesn’t save lives in a literal sense, his research preserves the lives of artists and writers of the past.

“You should save me because I’ll help you save who you’ve been and save all the people you have not been,” he argued. “I’ll show you how to come to terms with imperfect memory, fragile records and to shore up the memories you cherish the most.

“If we’re all going to die, we as a people are going to be defined not by what we manage to fit into our little, paltry life raft, but by a much larger portion of our humanity that we have left behind on these shores.”

Benson, associate professor in the Department of Political Science, was the next faculty member to take the podium. She said she can help the new society establish order and governance, while also preventing things like corruption or governance without consent from dooming the new future.

“You should choose a political scientist because they can tell you what works in leading to a stable, peaceful and prosperous society,” she said.

Fredrick, clinical assistant professor in the Department of Romance Languages and Literatures, followed Benson’s argument with the biggest surprise of the night when she revoked her candidacy for the final spot. Even though she argued that her knowledge of multiculturalism and languages would be necessary for a new society, she doesn’t want to be part of one that leaves others behind.

“Science without human morality leads to the harshness of Auschwitz’s furnaces or Hiroshima’s nuclear fallouts; it leads to some of the sophisticated tortures that have been used in Argentina and also Cuba,” Fredrick said. “Science with humane moral structure is what produces the grandest achievements in medicine, ecology or lifesaving technology; it is what enables human beings to survive plagues and to cure cancer or leprosy. I believe that science and the humanities cannot survive separately. I cannot survive in a world that divides the survivors. I do not want a place on a life raft that does not seat my other colleagues.

“We cannot choose who survives; the human struggle is for all or for none.”

Kruger, clinical assistant professor in the Department of Community Health and Health Behavior, made the cheeriest presentation of the evening, using a barrage of internet memes and props from her “adventure vest” to draw laughter from the crowd. She pleaded that her knowledge of public health could benefit society by preventing serious injury or sickness, and promoting wellness.

“What we need is to help change behaviors,” she said. “We need this new society to think about health, about prosperity, and how to have a long, healthy life. We can do this from using theories from psychology and other disciplines to understand why people do what they do and help make behavior changes.”

Lastly, Taylor, a professor in the Department of Urban and Regional Planning, said he could help in the creation of an all-inclusive and perfect society, especially after learning from what had derailed the old one. He acknowledged that it could be a pipe dream, but said humans should strive for that, regardless.

“The survivors can and must do better, but this will require imagining a different, but possible world: a society that is more just, equitable and inclusive than the old one. It will require having the capacity and the tools to design, plan and build that ultimate world,” he said.

“Urban planning is not only essential; it is indispensable” he added. “My discipline is pre-eminently positioned to play a leading role in building such a just society.”

After short rebuttals by each faculty member to further bolster their arguments, Wendy Quinton, clinical associate professor in the Department of Psychology and winner of last year’s Life Raft Debate, made her case as the devil’s advocate to leave behind all of the faculty members. She asserted that her generation was the one at fault for the climate change epidemic to begin with, and followed that up by proclaiming that good students no longer need their mentors to forge through adversity, using J.K. Rowling characters Harry Potter and Albus Dumbledore as examples.

“The best teachers make themselves unnecessary,” she argued. “Good teaching is all about fostering independence and giving students the skills and experiences they need to forge their way on their own. The truth is, you don’t need them anymore. Your first real act of independence can be deciding that you can move forward on your own.”

After plenty of debate, audience members murmured among themselves as they contemplated who had the best argument before voting on their smartphones. The lead changed hands multiple times in the final seconds of voting, further proving how evenly matched each professor was.

When voting concluded, Taylor emerged as the winner. As the crowd applauded the final member to join their new society, Taylor held up his winning prize: a rowing oar that commemorates all of the past Life Raft Debate winners.

“We cannot choose who survives; the human struggle is for all or for none.” – Sharonah Fredrick, clinical assistant professor, Department of Romance Languages and Literatures