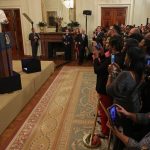 Disparities Black people face when dealing with the coronavirus could affect everything from voting to being incarcerated to socio-economic status, and more.

With the coronavirus disease 2019 (COVID-19) reaching pandemic proportions, the racial justice organization Color of Change has released a statement highlighting the disparities Black people face when dealing with the virus.

The president of Color Of Change, Rashad Robinson, explained:

“This pandemic reveals a terrifying reality — many Americans don’t even know if they are infected with COVID-19 because they are scared to go to the hospital and receive free tests and treatment that may saddle them with debt that could take years to pay off. After years of Republicans, big pharma and major corporations fighting against paid sick leave legislation and medicare for all we are left with a crisis where disproportionately Black low wage workers are continuing to support the public without the health insurance or paid time off that would make us all safer.”

Among the working poor, Black workers will witness an even greater impact.

“There’s a lot of occupational segregation in this country,” said Elise Gould, senior economist at EPI, according to Yahoo Finance. “So when we think of those low-wage workers they’re more likely to be women, black and Hispanic workers. This could hit some communities more than others.”

Robinson called out some of the richest names in the country when pointing to the inequality Black and Brown people face and how an economy impacted by the coronavirus could affect them. “Billionaires like Jeff Bezos, Mark Zuckerberg, and Bill Gates, who have made billions from Americans, have the means to provide testing for the entire country, several times over,” he said. “As we face down a potential recession, we also must ensure that our government bails out the working people and consumers who will feel the brunt of this recession, instead of executives and industries who have been hoarding their profits since Trump’s tax cuts took effect.”

So far, Donald Trump has unveiled a payroll tax cuts proposal through the election and into the end of the year, giving relief to some working Americans. On Wednesday, Democrats also released the Families First Coronavirus Response Act bill, which would provide paid sick leave, food assistance and extra funds for unemployment insurance benefits.

Although such measures are needed, Robinson from Color of Change is demanding more.

“When we return to ‘normal,’ the normal for most people will be economic hell,” he said. Robinson then called for “a moratorium on evictions and utility shut-offs” for Black and poor communities that are being pressed by the Center for Disease Control to stay home from work as much as possible.

Robinson also explained how the coronavirus could impact Black voters, who are already vulnerable to voter suppression.

“States with upcoming primary elections should actively consider providing expanded ballot access on an emergency basis for this election and in a permanent, ongoing way for future elections,” he said. “Any restrictions on travel or public gatherings must include provisions or exceptions that will ensure that voters, particularly oft-targeted Black voters, voters reliant on public transit, and other marginalized voters, are not disenfranchised. We applaud early efforts by officials like U.S. Senator Ron Wyden’s bill to protect voters and elections against COVID-19 risks.”

In addition to voting measures, Robinson also demanded the coronavirus doesn’t negatively impact the 2020 Census where “Black people are among the most undercounted populations in the census and an undercount will lead to communities not getting the funding and representation they need or deserve for the next 10 years.” He suggested the Census Bureau make clear and impactful contingency plans since the coronavirus “will likely hinder the efforts of census workers going door-to-door to ensure participation.”

Finally, Robinson called for action to make sure the coronavirus doesn’t affect the health of incarcerated individuals.

“We are deeply concerned about the health, safety, and dignity of disproportionately Black incarcerated men and women as officials respond to this outbreak,” he said. “While prison populations are quarantined from the general public, they are at high risk for COVID-19 outbreaks as they are kept in close quarters with inadequate food, water, and health care. Yet the nation’s jails and prisons have reportedly little access to coronavirus tests and in some cases, no soap, despite the inevitable spread of the epidemic in a captive population. Federal and state officials must ensure that testing and treatment for COVID-19 is available as needed in all jails and prisons.”

“Similarly, state and local officials should also use all available powers to immediately release incarcerated people who are particularly vulnerable to illness, such as the elderly and pregnant women, so they can move to lower risk environments. And anyone who tests positive for COVID-19 inside a jail or prison should be released and moved to receive adequate care in a hospital. We cannot allow the defense of our racist system of mass incarceration to take precedence over the health and well being of millions of incarcerated people.”

“They must also eliminate requirements that force incarcerated people to perform jobs that put them at risk for contracting the virus and institute a minimum wage for incarcerated workers who are providing vital services during this crisis,” Robinson said.

The NAACP is another civil rights organization that is preparing policy-makers to consider the most marginalized communities. They will be hosting an emergency town hall on Sunday to address the coronavirus and how communities can be best protected.