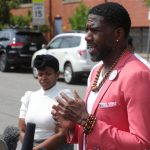 Walton cruised to victory last month by emphasizing new ways to solve old problems, especially in policing. She reiterated on Wednesday her plan to reallocate $7.5 million of the Police Department budget to programs that link usual subjects of police attention to mental health services. Her Wednesday event also marked the first of many in which she is expected to highlight her proposals, backed by high-profile figures like Williams. Others with similar socialist philosophies – such as Rep. Alexandria Ocasio-Cortez of the Bronx and Sen. Bernie Sanders of Vermont – are mentioned as other potential campaign allies.