Listen To The Story
Marketplace

New York City has the largest public housing system in the country. A lot of that housing is decades old and not in good condition, to put it mildly. New York has a vast backlog of repairs it needs to make to its public housing, but the cost to get all its buildings up to snuff is steep — almost $32 billion over the next five years, according to a recent report from the city’s housing authority.

Angel King knows about that backlog first hand. She has lived in a sprawling housing development in Canarsie, Brooklyn, since she was a little girl. It’s called the Breukelen Houses, and it was completed in 1952. King still remembers how the complex felt when she and her family moved in in the ’80s.

“To us, it was like, ‘Wow!’ Everything was so shiny, it was so new,” she said. “The hallways were always clean.”

She and her mom share an apartment, and these days the development is run down. King is a vice president of the tenants’ association, and she hears a lot of complaints. She said it can take weeks for housing authority workers to come out and fix something. The authority’s website backs that up. It shows completing repairs at its properties takes almost two months on average. 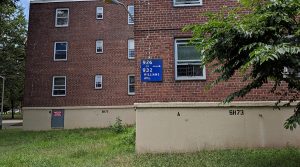 One of the buildings at the Breukelen Houses, with signage dating back to the 1950s.  – Ashley Milne-Tyte/Marketplace

The grounds of her complex are lined with trees, but in one of the buildings’ hallways, King pointed out graffiti on the walls, layers of dirt in the corners and broken tiles.

She noted a rust-encrusted pipe on the stairwell and said, “All behind that pipe — that’s mold back there.”

The New York City Housing Authority admits its housing stock has a lot of problems: mold, lead paint, broken boilers that force residents to use their ovens to keep warm during the winter, just to name a few. It blames the federal government for the crisis.

“This is a universal problem with the lack of funding that’s coming through,” said Deborah Goddard, NYCHA’s executive vice president for capital projects. She said federal funding has been cut by almost $3 billion since 2001. Meanwhile, pubic housing has gotten older and needier than ever. The backlog of repairs goes back years and keeps getting worse. 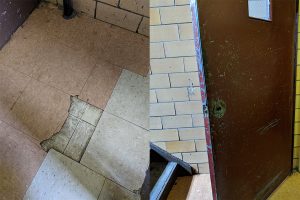 Broken tiles and a damaged door in a hallway at the Breukelen Houses. – Ashley Milne-Tyte/Marketplace

“It’s as if you have a loan and you can’t pay the interest on it even,” she added.

She said NYCHA can only muster a third of the $32 billion needed for overhauls.

The situation isn’t unique to New York. Henry Taylor, who teaches urban and regional planning at the University of Buffalo, said that back in 2010, a study by the Department of Housing and Urban Development showed the nation’s public housing needed billions of dollars’ worth of repairs.

“In every city in the country, public housing is in trouble for the exact same reason,” Taylor said. “And as a consequence of that, you’ve been finding public housing as we know it is starting to disappear.”

Chicago is one example. Many public housing units there have been demolished.

“In a number of other places, people have turned their units over to the private sector for management,” he said.

In New York, NYCHA is experimenting with public/private partnerships as a way to remove some public housing from federal funding rolls. The city has also committed some funding. That includes more than $1 billion as part of a settlement with federal prosecutors over mismanagement at NYCHA, including a failure to conduct lead paint inspections while claiming it had done so.

Goddard said current funding isn’t enough to revamp everything from broken elevators to dilapidated kitchens and bathrooms in tens of thousands of apartments.

“We have to keep beating the drum for more money,” she insisted. “We don’t have an option to do otherwise.”

With a severe housing crunch in New York, she said public housing residents have nowhere else to go.

At the Breukelen Houses, Angel King said outsiders often have preconceived notions about her longtime home, “Like it’s the projects,” she said. “But it’s not, this is a housing development, it’s a complex where everybody lives. And we have just as much right to live in a happy, healthy environment just as much as anybody else.”