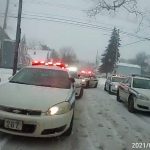 Read the full article from The New York Times here.

“The police department in Rochester, N.Y., released body-camera footage on Sunday that showed a 9-year-old girl being handcuffed and pepper-sprayed by police officers who had responded to a family disturbance call. During the incident, which occurred Friday afternoon, officers restrained the girl, pushing her into the snow in order to handcuff her, while she screamed repeatedly for her father, the footage showed. At one point, an officer said, ‘You’re acting like a child.’ She responded, ‘I am a child.'”