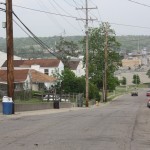 The Destruction of a Black Suburb

Lincoln Heights, Ohio, once had the potential to become a thriving community, but today it’s in crisis. This is no accident.

Re-post from The Atlantic

LINCOLN HEIGHTS, Ohio—African Americans started coming to Cincinnati more than a century ago, fleeing the violence and economic constraints of the South for jobs and homes.

But redlining and other restrictive zoning laws prohibited black families from buying homes in many of the city’s neighborhoods. So when developers started selling off lots of unincorporated land north of Cincinnati to black buyers, it seemed like a good opportunity, one of the few paths to homeownership in the segregated North.

The land had no paved roads and no streetlights. Few homes had running water and there was no police or fire protection. Carl Westmoreland, who grew up in this village in the 1940s, remembers watching black men rush over a hill toward a burning home with a small fire cart they’d bought. They didn’t save it in time, but the neighborhood banded together and rebuilt the house together. He refers to the community at the time as “America’s Soweto” for the primitive living conditions there.

When it incorporated in 1947, this village, called Lincoln Heights, was the first primarily black self-governing community north of the Mason-Dixon line. (Today, the city has one of the highest concentrations of African American residents in the state of Ohio—according to the Census, 95.5 percent.) Lincoln Heights thrived for a while, producing poet Nikki Giovanni, songwriters the Isley Brothers (who wrote “Twist and Shout”), and scholar Carl Westmoreland, who now helps run the National Underground Railroad Freedom Center. Hundreds of residents worked at the nearby Wright Aeronautical Plant, manufacturing the B-29 bomber, and at a chemical plant a few blocks away, putting away money to improve their homes and secure their places in the black middle class. So successful was Lincoln Heights in its early days that New York’s governor, Thomas E. Dewey, invited prominent officials to New York City for a ticker-tape parade to honor the village as one of the only self-governing African American communities in the nation, according to Lincoln Heights, by Carolyn F. Smith.

“It really was a situation where people made something out of nothing,” Westmoreland said about the suburb.

But today, Lincoln Heights is struggling. Its median household income of $25,568 is less than half that of Blue Ash, a nearby majority-white suburb. About 16 percent of residents are unemployed, and one-third of families earn below the poverty level. The schools are bad—parents of about 40 percent of students send them to other schools in the area. The town’s police and fire departments shut down in October 2014 after an insurance company pulled the village’s insurance after balking at the number of lawsuits filed over civil-rights violations, wrongful terminations, and wage disputes. The fire department reopened, but the county sheriff took over for the police department earlier this year. The sense of community and pride that governed the town’s early days have all but disappeared.

How one of the first black suburbs in the country fell so far from its halcyon early days exemplifies how systemic racism hampered the goals of those who were trying to build a community there. The people of Lincoln Heights might have had their own suburb, but the world made sure they had little else. From the beginning, historians say, the town was doomed to fail.

“The notion of suburbanization, of neighborhood opportunities, all of that is embedded in that fantasy that black people can move to freedom, and we can’t,” said Henry Louis Taylor, a professor of urban and regional planning at the University at Buffalo, who wrote his dissertation on Lincoln Heights.

Residents of Lincoln Heights first tried to incorporate in 1939. Men were sick of working two jobs and then coming home to the chaos of open sewers and burning buildings and dark streets. Someone needed to put in paved roads and electricity and inspect buildings to make sure they were up to code, and the county government nearby had no interest in doing any of that. If the residents of Lincoln Heights incorporated and provided city services themselves, the thinking went, they wouldn’t have to wait around for white officials to cooperate.

They decided to form “their own city, a city, a village, a place where black men and women could respond to the civic needs of their neighbors, a place where black children could grow up to become the mayor, the chief of police, the safety director,” Westmoreland wrote, in a piece for the now-defunct Nip Magazine.

Local residents filed the proper papers with Hamilton County, but just a few minutes before the filing deadline, white residents from the nearby city of Lockland filed an objection. Lockland residents were worried that should Lincoln Heights be improved, its business district would rival Lockland’s, according to Westmoreland.

War began in Europe and more delays ensued. The Wright Aeronautical Plant was located on the land Lincoln Heights wanted to incorporate, but the plant manager, wary of being located in a black area, asked the county to delay the application further.

Westmoreland remembers Lincoln Heights residents slowly realizing that they were going to have to fight for land that had widely been considered theirs, and that, as African Americans in the 1940s and 1950s, they were probably going to lose.

“I remember them saying that those white folks are not going to let this place succeed,” he told me, sitting outside the house where he grew up in Lincoln Heights.

When the county finally allowed the city to incorporate, in 1946, the boundaries were radically different than black residents had once hoped, encircling about 10 percent—one square mile—of the original proposal. The village now included no major factories or plants and no industrial tax base.

“They ended up in a situation like many of these smaller suburban communities, without the type of economic framework and base that’s going to be required to sustain itself for a period of time,” said Taylor, the University of Buffalo professor. “Without that type of revenue base, these little small places would eventually get into trouble.”

In much the same way that large municipalities such as Detroit and Cleveland started to suffer when white residents fled to the suburbs, taking with them prospective tax revenue, black suburbs such as Lincoln Heights struggled without the resources of better-paid white residents and thriving businesses. The difference is that Lincoln Heights had those resources until the residents of nearby suburbs usurped them. Lincoln Heights didn’t have to lose population to fail, its failure was written in the way the county shaped its boundaries from the beginning.

It’s an example of the type of structural impediments that have hampered black suburbs like Lincoln Heights and Ferguson all across the country.

“The metropolitics of U.S. urban regions make it possible for high-income groups to develop their own suburbs and hoard their resources within their municipalities,” Taylor said.  “The absence of revenue sharing and the equitable distribution of resources in Hamilton County and elsewhere mean that Lincoln Heights will struggle to provide its residents with the high quality of services they need.”

Some municipalities, such as Minneapolis-St. Paul, established revenue sharingso that poor and rich towns in the same region could all prosper. But the majority of areas kept their finances separate, and their boundary lines drawn.

When Charles Willis grew up in Lincoln Heights in the 1960s, there was still a sense that this radical idea of a black self-governing suburb could work. Emboldened by the gains of the civil-rights era, community members worked together to provide support and services for one another and to create a sense of a community that would equip them for the outside world.

When he was growing up, people took pride in the fact that Lincoln Heights was the largest predominantly black city in America. Parents sent their kids to schools and expected them to succeed, even if they themselves couldn’t read. Carl Westmoreland remembers standing up in front of his church along with the rest of his class and having to give a five-minute speech on what he wanted to be when he grew up. He remembers bricklayers and day laborers working together to build houses for neighbors, and he remembers helping friends carry buckets of water from the fire hydrant every Sunday because they didn’t have any running water.

As recently as 2001, the Cincinnati Enquirer wrote a piece about a black family that had moved to a white neighborhood, been harassed, and decided to move back to Lincoln Heights. “Lincoln Heights provides the Hills and other African Americans a sense of home, history and pride that they don’t experience elsewhere,” the story said.

But over time, Lincoln Heights residents found it more difficult to maintain that sense of community. For one thing, the jobs in nearby towns in factories and chemical plants started to disappear as American manufacturing began to shrink in the 1970s and 1980s. As unemployment rose, Lincoln Heights lacked a tax base deep enough to underwrite community development and other social-welfare programs. Soon, it became obvious to anyone who grew up in Lincoln Heights that if you wanted to make something of yourself, you had to get out. People who grew up in Lincoln Heights and were lucky enough to go away to college didn’t come back. Those who stayed largely were the ones who couldn’t get out.

“People who left to go get educated, they never came back,” Willis told me. “They either stayed in their university cities or moved to Florida or California or what have you.”

For Willis, it was a lesson in advocacy for African Americans: Black residents should have been focusing on creating local businesses and a thriving economy, rather than going elsewhere to succeed, he says.

“Dr. King was right to say we should be able have a cup of coffee. But, guess what, Malcolm X was right too. We should’ve been building our own,” he told me.

The future does not look bright for Lincoln Heights. Home values fell 76.4 percent between 2007 and 2013, while home values in tiny Indian Hill, a nearby suburb, rose 27.7 percent. The elementary school is abandoned, and when the district put it up for auction earlier this year, with a minimum bid of $69,900, no one came forward to buy it.

When I drove around town with Westmoreland, we passed crumbling homes and boarded-up stores. There was one convenience store that seemed busy—men congregated in its backyard, smoking cigarettes. But when I went back alone and tried to talk to the men in the yard, the owner, incensed, yelled at me as soon as I identified myself as a reporter.

“Move on out of here,” he said. I left and later learned from residents that the store is an open-air drug market, completely ignored by police. It sits on the same street where Carl Westmoreland grew up.

Last year, two nonprofit groups, the Cincinnatus Association and Citizens for Civic Renewal, put out a study that concluded that Cincinnati and its suburbs needed to cooperate—consolidate local governments and share services—to thrive. The idea was supported by an editorial in the Cincinnati Enquirer, which argued that cooperation could reduce inequality.

“Politically fractured regions can contribute to social separation and inequality, as residents perceive they can ‘move away’ from problems rather than contributing to their solution,” the editorial said.

Albert Kanter, the former executive director of the Lincoln Heights Community Improvement District, wrote a letter to the newspaper in support of the plan, arguing that it would help communities like Lincoln Heights.

But nearby wealthy towns seem to have little inclination to share services or revenues with Lincoln Heights. They were built, after all, not by sharing but by taking away. And they have little motivation to change that now.