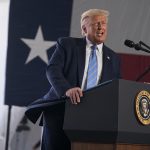 Trump boasts of pushing low-income housing out of suburbs

The connection between the president’s denigration of low-income housing and racial segregation was not lost on his critics.

President Donald Trump is pining for support in the suburbs, and pushing out low-income housing is playing a part in his bid to get it.

In a set of tweets and in remarks in Texas on Wednesday, Trump bragged about his administration’s rescinding an Obama-era fair housing rule that was meant to combat housing discrimination. He characterized low-income housing as a detriment to the suburbs and claimed that Democrats were out to uproot and destroy suburbia — a cultural sphere that he equated to the American dream.