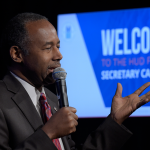 What would $6 billion in budget cuts mean for public housing?

The Trump administration is considering proposing cuts, preliminary HUD budget documents suggest. The documents have left advocates searching for ways to maintain the positive impacts of HUD funding on a reduced budget.

Re-post from The Christian Science Monitor

Funding from the Department of Housing and Urban Development helps reduce homelessness, fund infrastructure, and enhance community services, data suggest. But how would cuts to HUD’s budget affect the families and communities that use those services?

Preliminary budget documents obtained by The Washington Post and others seem to suggest that HUD is facing approximately $6 billion in budget cuts for the next fiscal year, which starts in October. Around $4 billion worth of cuts would come from community development grants that provide facilities such as gyms and community theaters as well as funding local services. The rest of the cuts would come out of public housing programs. Assistance for the elderly, veterans, and Native Americans is among the hardest hit.

All in all, the proposed cuts would shrink HUD’s budget by around 14 percent, though HUD Secretary Ben Carson reassured staff in an email that “starting numbers are rarely final numbers.”

For advocates, budget cuts are a way to trim the budget deficit and reorient government spending toward other priorities, such as national defense. Fair housing advocates, however, see the proposed cuts as the latest in a series of cost-reduction measures that have stretched the beleaguered agency beyond its capacity. They emphasize how valuable these programs are for families and communities, and suggest the importance of maintaining that value.

“When low-income families with kids … move into lower-poverty, safer neighborhoods with better schools, it has a pretty significant impact on long-term outcomes for kids,” says Douglas Rice, a senior policy analyst at the Center on Budget and Policy Priorities, in a phone interview with The Christian Science Monitor.

Children are more likely to attend college, much less likely to become single parents, and enjoy higher salaries when they start work, Mr. Rice says. By some alternative census measures looking at the impact of in-kind benefits, he adds, federal rental assistance helps to lift 4.1 million people – including 1.4 million children – out of poverty each year.

But in an era of tight budgets and budget deficits, HUD has been underfunded “for a number of years,” says Robert Silverman, a professor of urban and regional planning at the University of Buffalo, N.Y., in a phone interview. Estimates suggest that just 1 in 4 eligible people are currently receiving HUD rental assistance because of funding limitations.

The Trump administration has also stated that it plans to find $54 billion in its budget proposal for increased defense spending, meaning many of these cuts are likely to make it into the White House’s proposal, Rice says. He estimates that HUD will cut above and beyond the estimated $6 billion, potentially reaching a total of $7.7 billion in cuts.

For advocates, the question is how to maintain that positive impact of HUD programs in the face of further funding reductions. Since the Nixon era, presidents have experimented with welfare reform and privatization, writes Holona Ochs, a political science professor at Lehigh University in Bethlehem, Pa., in an email. Could private corporations and philanthropic organizations help bridge the gap now?

“To the scale of this, the answer is no,” says Marc Morial, president of the National Urban League, in a phone interview. “Social organizations already stepped up to the plate.” In many cases, these organizations are already working at the limits of their own capacity, he adds.

And if the Trump administration is hoping to increase public-private partnerships, cutting community development grants like CDBG and HOME may be counterproductive, explains Jerry Anthony, associate professor at the University of Iowa School of Urban and Regional Planning. The funds for these programs are leveraged to bring in more money from the private sector.

“These programs are crucial to local economy development,” he says, explaining that every federal dollar invested in these programs can bring in three or more dollars.

“Localities have a lot of flexibility in how those funds are used,” he adds, noting that they have been used to build community theaters, preserve historic buildings, and support parks, among other initiatives.

But if the private sector cannot provide a complete solution to the challenge of maintaining funding, it might be able to “soften the blow” by growing an existing pilot program, Professor Silverman indicates.

Since federal housing often lacks the money to do maintenance, many buildings have fallen into disrepair, he explains. That amounts to tens of billions of dollars in repairs, a 2010 HUD report found, making federal housing a costly option. Instead, as HUD has moved toward a voucher program that allows families to find their own housing on the market, private developers can get tax credits and loans to rehabilitate existing developments.

With private developers doing the work, this approach “doesn’t really have a big revenue impact” for HUD, Silverman explains. And companies are happy to do it because they know that tenants with rental vouchers will occupy the building when it is rehabilitated, giving them a secure revenue stream.

Ultimately, many observers indicate, maintaining these social benefits may hinge on increasing, rather than decreasing, HUD investment. Even if funding was held steady, 200,000 households could still be affected, Rice indicates, thanks to a combination of rising rent prices and inflation.

And they suggest Congress, which has the final say on the budget, may agree. There has been longtime bipartisan support for many of these programs. Part of that is pragmatic, according to Silverman.

“I wouldn’t imagine that there would be broad-based support in Congress for just cutting the budget drastically,” he says. “Every Congressman has constituents that they’re trying to maintain their level of funding for.”

The White House is expected to release its budget proposal in the next few weeks, after which it will go to Congress for consideration.