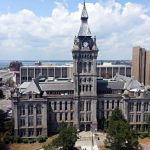 Erie County Corrections Advisory Board expected to be approved next week

The Erie County Legislature held a public hearing Thursday evening, but not a single speaker showed up. That was unexpected, because the hearing revolved around the plan for a Corrections Advisory Board, which has been controversial.

Earlier in the day, Erie County Sheriff Tim Howard told the Legislature’s Public Safety Committee he would go along with the creation. That was unexpected as well, as he has been unhappy about recreating a board that fell out of existence six years ago.

The sheriff told the committee he wanted “an open-minded, honorable advisory board,” not one “to advance a political agenda,” and that its work might benefit his department. That was such a breakthrough that hours later, no one showed for the evening hearing.