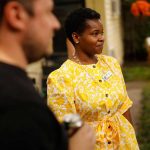 Walton grew up poor in one of the city’s poorest neighborhoods, but she beat Buffalo’s four-term mayor, Byron W. Brown, with votes – and a lot of campaign help – from professionals in the city’s wealthier enclaves. And now Walton and her supporters are working to defeat Brown’s write-in bid in November and create a progressive city administration led by a self-proclaimed democratic socialist.