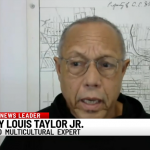 “Experts say the racial slur is meant to describe people who are mixed race and it dates back to slavery and the practice of raping female slaves. ‘Rape was institutionalized, and it meant that women were the plaything of the plantation owner to be taken whenever he chose to. As I always say, when I look in the mirror I see the color of rape,’ said Henry Louis Taylor Jr., UB director of the university’s Center for urban studies. ‘It’s a reminder of a time when African American women had no control over their bodies.'”