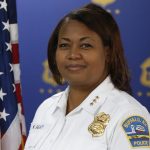 Sheriff’s candidate: Party chairman said she’s ‘not what a sheriff looks like’

Read the full article from The Buffalo News here.

“Kimberly L. Beaty has more than 30 years in law enforcement and believes she has credentials to make a strong push for the Erie County sheriff’s seat as former deputy commissioner for the Buffalo Police Department. But according to her recount of conversations with the Erie County Democratic Party chairman, there was one thing Beaty didn’t have. The right look. ‘He said, “You’re not what a sheriff looks like, and what people are used to,” ‘ she recalled.”