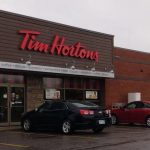 The establishment will be built by Ellicott Development at Michigan Avenue and William Street.

“It’s definitely a sign of progress, when you talk about even, a few blocks away from the proposed Tim Hortons supposed to be a grocery store in downtown Buffalo, close to the east side,” Pridgen said. “So we are seeing some businesses come to the east side that would not have even looked our way in the past.”

University at Buffalo professor and department of Urban and Regional Planning Founding Director, Center for Urban Studies, Henry Louis Taylor Jr. disagrees. He says, more commercial development on the east side, might not be such a good idea.

“The Tim Hortons is anchoring that change process, and it’s located there because of its proximity to downtown as well as its proximity, to rising neighborhood that’s becoming home to an increasing number of whites.”