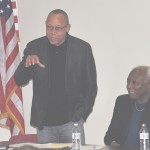 What Urban Renaissance? How Planning Can Bring Prosperity to Distressed Urban Neighborhoods

“Buffalo is experiencing an economic boom, but the explosion will not automatically spark the revitalization of precarious East Side neighborhoods, an area consisting of black neighborhoods lying east of Main Street and north of South Buffalo,” writes Henry Louis Taylor, Jr., PhD, professor of urban and regional planning, in a recent Buffalo News viewpoint piece (Sept. 7, 2014).

Taylor continues that residents of these neighborhoods bordering Buffalo’s booming medical campus, downtown and waterfront, are living urban life in reverse. Rather than moving toward economic opportunity, they are moving away from it. This “market-driven paradox” is the result of compounding factors including a lack of investment in existing housing stock and the spread of blight and joblessness, together fueling health challenges, inadequate schooling, crime and a lack of hope.

As director of the Center for Urban Studies, Taylor and a contingent of planning staff and students are extending economic opportunity to these communities through a soup-to-nuts neighborhood planning model rooted in research and aggressive resident and community outreach.

Most recently, the center completed the “Perry Choice Neighborhood Transformation Plan” for a post-industrial enclave just south of downtown and adjacent to the redeveloping Canalside area and Cobblestone District. The federally-funded comprehensive planning effort – led by the Buffalo Municipal Housing Authority (grantee) and the Center for Urban Studies (planning coordinator), along with the Philadelphia-based planning and design firm Wallace Roberts & Todd – links physical improvements, including a reimagined public housing complex, to improved access to quality education, job training, health services and transportation. A few miles north, in the Fruit

Belt neighborhood next to the Buffalo Niagara Medical Campus, the center continues its years-long “community as classroom” program to engage middle-schoolers in neighborhood redevelopment.

The center is now replicating these planning models for other East Side communities. Taylor says the work also applies broadly to legacy cities across the country and even internationally as the center prepares to launch a planning initiative in Havana, Cuba.

Earlier this year, HUD highlighted the work of the Center for Urban Studies (as well as the UB Regional Institute) in its recognition of the University at Buffalo as a national best practice for community outreach and development efforts in downtown Buffalo and its surrounding neighborhoods.

We sat down with Taylor recently to refect on what goes into turning around a distressed urban neighborhood, and what steps government and business leaders can take to ensure the cit y of Buffalo’s economic renaissance benefts all.

What is the role of planners in this kind of work?

Let’s take Buffalo’s East Side as an example. This community has a tremendous wealth of human and organizational capital. How do you put these multiple population groups together? Do you let them continue to operate in silos or do you help them work together? This gets to the profound role of planners. We have to be designers of the entire community. Planners need to build both the physical environment as well as the social and institutional structure of neighborhoods, the interfaces and the connections. If we are to bring about real, meaningful change for distressed urban neighborhoods, you can’t just build a house or create a really nice park. The community needs to be a part of and own the plan.

Tell us a little bit about how CUS builds buy-in for this work?

In the case of the Perry neighborhood, South Park Avenue is a boundary line between the predominantly white and black neighborhoods. We knew we had to build a relationship across that line. Once we got moving, they were extremely supportive and helpful. We held dozens of focus groups, conducted structured surveys of almost 70 percent of residents in the Commodore Perry public housing complex and interviewed service providers. We sent a busload of our students into

the community to conduct surveys of residents. We set up a Planning & Information Center staffed by our students and residents to link the planning team and community members.

This became the material we used to drive the plan.

Perry youth take “preference surveys” to share their input on proposed streetscape and building designs for their neighborhood. Photo courtesy of Center for Urban Studies

One of the project’s most significant findings was that the supportive services organizations were not efficiently organized to effectively deliver services in the neighborhood. They made no distinction between neighborhood- and city-level services and lacked a place-based focus on service delivery. Also, many residents didn’t realize the types of services available. We had to rethink the system. But what I didn’t expect was the willingness of these organizations to attend meetings and commit staff and time to this process – from Catholic Charities of Buffalo, to the United Way of Buffalo and Erie County, to Say Yes to Education. We were able to literally reconceive and redesign the organizational framework of the neighborhood and community. The heads of these organizations are now important collaborators and leaders of this plan.

How does this translate into implementation? Who needs to play a role, and how?

We are in the midst of a neo-liberal economy that calls for smaller government and fewer taxes. Government doesn’t have the capacity it used to. It becomes partner and other organizations drive development. At the same time, you need a lead organization to pull together this network and provide staff to move collaboration forward. It’s the catalyst, the engine and conscience of the plan that keeps thing moving in the right direction. It’s also important that developers buy into the vision. If they do, then you’ll find they’re willing to do some things they wouldn’t be willing to do otherwise. In the Perry neighborhood, when the Seneca Buffalo Creek Casino was being developed, we worked with the developer to externalize retail. They also worked with us to target housing for casino employees. Developing a neighborhood is a lot like stitching a quilt. Everybody has a piece, but if we stitch together with a theme, then we can make a great quilt.

Behind Buffalo’s renaissance is a framework of plans, including  Buffalo’s comprehensive plan, a new regional economic development plan for WNY and the Green Code, the city’s frst zoning code rewrite in 50 years. How does CUS’s work at the neighborhood level build off these efforts?

Our job as planners is to connect to these efforts. In the case of the Green Code, we went back and forth to make sure the strategies were consistent, compatible and reinforcing across both plans. The Perry Choice plan also integrates with One Region Forward, a regional plan for sustainable development, as well as plans for adjoining communities, including the Larkin District to the east, the Old First Ward to the South and Canalside to the west. It’s a system of plans and it’s everyone’s job to connect those efforts. This applies, too, to on-the-ground development and specific projects. In the absence of this, it can actually accelerate decline in distressed communities.

New public and assisted living units are designed to be street-facing, visitable and energy-efficient. Rendering by Wallace Roberts & Todd

What else can we be doing to address this “market-driven paradox” affecting distressed neighborhoods in Buffalo and beyond?

We studied the Perry neighborhood census tracks and found that 30-40 percent of the population was spending 50 percent or more on housing. That’s a significant proportion of the population at or above the cutoff for the recommended financial burden for housing. When old housing meets a low-income population, it’s toxic.

“City leadership can  do two  things. One is to have  a strategy for upgrading existing housing units. Most housing dollars now go toward new  builds. The second thing is to creatively utilize our existing resources. Public art and small design projects can  change the image of a neighborhood.”

The plan for the Perry neighborhood calls for more than 800 new and renovated mixed-income housing units over 10 years; restored street grid connections to the waterfront, downtown and South Buffalo; walkable, tree-lined streetscapes; a new central park and pocket parks throughout the neighborhood, and a 105,000-square-foot multi-service community center.

What if we were to structure curriculum to allow young kids in art class to engage in this work? In our summer academic camp with the Futures Academy [in the Fruit Belt neighborhood], a student made a sculpture out of “junk,” and it cost $4 to produce. We mounted murals on vacant buildings. It just requires the organization of people and institutions that are already willing to do this work. I would also call upon the private sector and foundations to invest in socially responsible causes in these neighborhoods. Local government doesn’t have this capacity. It’s a matter of how we refocus the resources we have.

How is CUS working to transfer knowledge across the city and outside the region?

The plan itself provides a framework for neighborhood development. In Buffalo, we’re already working with the King Urban Life Center to implement a similar plan for Buffalo’s Martin Luther King Park neighborhood, which will be anchored in early childhood education. This, in turn, will allow us to implement our early childhood education program in the Perry neighborhood. We also recently conducted a health needs survey for the Greater Buffalo United Ministries. Their network of churches will serve as a portal to a recently formed coordinated care network for the city’s Medicaid beneficiaries. If we can link that work to the Perry neighborhood and Kensington Heights, we can create a city-wide coordinated care network.

“At the center, we have  a marriage between our  research and our practice- based work. We’re publishing peer-reviewed research informed by the realities here in Buffalo.”

Robert Mark Silverman, [associate professor of urban and regional planning and a faculty affiliate of the center], is leading a project to make recommendations about where the government should place affordable housing in 10 of the fastest-shrinking U.S. cities, including Buffalo and several other transitioning cities where gentrification threatens access to affordable housing.

We work across the city and world to replicate and share ideas. In Cuba, we’re in the process of building a program to explore neighborhood conditions as social contributors to health issues. We’ve gotten through the first tier of approval from the Cuban government. We’re also attempting to set up a study abroad program on health and housing in Havana in partnership with UB’s School of Public Health and Health Professions. All this is connected.

Our overarching belief is that across the Americas, the challenges of marginalized groups are similar enough that we can create solutions with impact across the board.