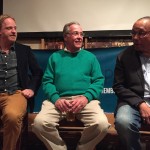 Those who know Buffalo say the city is getting its mojo back, but still needs a lot of work

A writer, a professor, and a developer walk into a bar. There’s no punch line to follow because that’s actually what happened during a panel discussion on Tuesday night at Allentown Hardware. The main question – is Buffalo getting its mojo back?

Nussbaumer said the city has come a long way from where it was, but hasn’t made a full rebound yet. He said he often gauges how Buffalo is doing on how well he can keep up with what’s going on in town.

“For the first time ever I have a really hard time keeping up with what’s going on,” said Nussbaumer.

Nussbaumer fields constant emails and conversations with people moving back to Buffalo and engaging in new activity.

Termini said the city is in its mojo infancy. He pointed out that every project in Buffalo has a subsidy associated with it, from tax credits for historic properties and brownfields to cash injections from state or local government.

“I think you get your mojo when you don’t need any of those subsidies,” Termini said.

As for Taylor, he took issue with the concept of getting mojo back. He said the mojo of the past should not be a present concern. Instead, Taylor believes residents should focus on the task of creating a new mojo.

Taylor said the city template should be anchored around social, racial and economic justice. He said prosperity and growth should be looked at as a means of creating a new way of life.

In regards to the best thing Buffalo has going for its resurgence and areas in which it can stand for improvement, all three agreed that the most positive asset is a new wealth of young residents.

Among the items thought to be negative were an underperforming education system, failure to develop the city’s east side, and a lack of vision for accommodating minority and low income residents.

The conversation quickly turned to the question of how to revive Buffalo’s East Side neighborhoods and a key issue.

All three panelists generally agreed that the conversation needs to come from within the east side community, but debated over whether outside help would be appropriate. Taylor said the person or entity hasn’t yet emerged who can take charge of the issue.