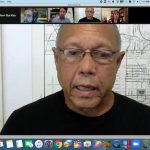 Watch the video and read the full article from WKBW here.

“Call it a ‘post game breakdown’ of the 2020 election in Western New York by professors at the University at Buffalo.
The question – is traditionally blue Erie County becoming republican country?…
Professor Taylor says the Trump administration has caused a deep divide and that reveals far reaching racism.
‘This is Donald Trump’s America,’ Taylor stated.
Taylor also stated that he believes democrats have ‘no vision that excites people.'” 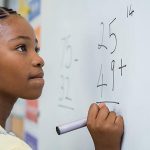 Confronting the Causes of Residential and School Segregation

“Evidence shows that government housing policies and individual practices created and sustain segregation between white and Black people and that segregation exacerbates racial wealth inequality, racial achievement gaps, and racial profiling. This 2017 study applies a “white racial frame” to explain the persistence of residential and school segregation, synthesizing more than 60 articles from the fields of sociology, economics, critical theory, and law. The authors’ frame reflects the theory that white people who hold power in the US purposefully maintain their dominance and perpetuate socioeconomic inequities based on race and ethnicity. By applying this frame, the authors shift focus from disparate outcomes by race and ethnicity to the (often white) lenders, police, educators, and politicians who shape structures of opportunity.” 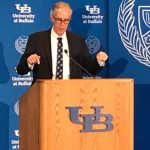 “The fact that this community-university partnership was able to mitigate the high mortality among African Americans in the first wave puts us in a position to build on that achievement during this coming flu season and a possible second wave,” said Tim Murphy, MD, SUNY Distinguished Professor in the Jacobs School of Medicine and Biomedical Sciences at UB and director of the Community Health Equity Research Institute and UB’s Clinical and Translational Science Institute “And it’s something that can be replicated in other communities.” 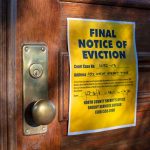 “‘Without rent forgiveness, tenants will ultimately have to pay back rent along with any late-fees and penalties, or face eviction when the moratorium is lifted,’ Silverman explained. ‘It is ultimately up to landlords to decide if they are going to pursue eviction, but at some point in the future, we can anticipate that there will be a spike in evictions across the country. It could be very destabilizing to the economy at the very time that the COVID crisis ends. For renters, it will also have ripple effects on their credit history and ability to find replacement housing.'” 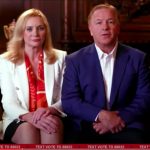 “A Republican National Convention speaker falsely claimed that the Democratic Party under Joe Biden would ‘abolish the suburbs altogether by ending single-family zoning.’ That’s not true. The claim came from Patricia McCloskey, a St. Louis lawyer who, along with her husband, Mark, is facing felony charges for pointing guns at protesters marching outside their home…’This is a red herring, pure and simple,’ said Robert Silverman, a professor or urban and regional planning at the University of Buffalo. ‘Zoning is a local function in the United States, and the suggestions made in the McCloskeys’ speech are patently false.'” 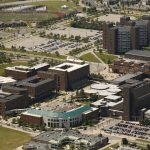 “Advocates for racial justice celebrated a decision by the University at Buffalo to strip the names of three historic figures from university buildings, facilities and roads because they supported slavery or promoted racist policies and values. ‘I think it’s a good move, and I think symbolism is important,’ said Henry Louis Taylor, a professor at UB’s Department of Urban and Regional Planning. ‘For the nation to deal with the issues of race in this country, we have to be honest about our history.'” 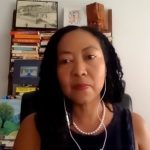 Henry Louis Taylor Jr., professor in the Department of Urban and Regional Planning and director of the Center for Urban Studies, outlined UB’s history in addressing racism on campus and in the community. From the late 1960s to the mid-1990s, UB built an infrastructure, including launching educational programs and hiring faculty members of color, to link UB to the Black community, he said.

But that infrastructure dwindled over the past two decades, a result of declining government support for public education, as well as flawed university efforts to address these issues, Taylor said. He called upon UB leadership to reinvest in these programs, and tackle race and racism in a more direct manner.

“I theorize that whenever race is not explicitly stated, whiteness becomes the default group, and people of color are pushed to the margins,” he said.

Those who were unable to attend the live event can watch it online. 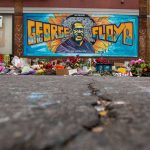 Read the full article from The Conversation, here.

The legacy of structural racism in Minneapolis was laid bare to the world at the intersection of Chicago Avenue and East 38th Street, the location where George Floyd’s neck was pinned to the ground by a police officer’s knee. But it is also imprinted in streets, parks and neighborhoods across the city – the result of urban planning that utilized segregation as a tool of white supremacy.

Today, Minneapolis is seen to be one of the most liberal cities in the U.S. But if you scratch away the progressive veneer of the U.S.‘s most cyclable city, the city with the best park system and sixth-highest quality of life, you find what Kirsten Delegard, a Minneapolis historian, describes as “darker truths about the city.” 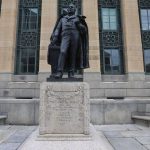 Millard Fillmore gets little love from presidential historians, but he’s enjoyed favorite son status in Buffalo for more than 150 years.

The 13th president lived here for years before and after his term in the White House. His fingerprints are on many educational and cultural institutions, from the University at Buffalo to Buffalo General Medical Center, and his name and image are sprinkled throughout greater Buffalo.

Now, Fillmore’s signing of the Compromise of 1850 – which included the loathsome Fugitive Slave Act – and his unsuccessful presidential run as a member of the anti-immigrant, anti-Catholic Know Nothing Party are raising questions about his lofty local status. 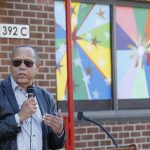 With faculty nudge, can UB lead on social justice?

A few years ago, University at Buffalo President Satish Tripathi used his annual address to trumpet the UB 2020 strategic plan as laying the groundwork for propelling Buffalo Niagara in everything from health care and the arts to business and industry.

But with that target year now here and bringing a whole new set of issues – or, rather, an acknowledgement of issues that Blacks have long tried to raise – UB’s faculty is pushing one of the region’s major institutions to take on something else: systemic racism.

In an overwhelming vote a couple of weeks ago, United University Professions – which represents most faculty – passed a resolution condemning “police violence against African American, Indigenous and Latino/Latina residents,” opposing “the militarization of police and its impact on communities of color and on peaceful protests,” and supporting “reallocation of Buffalo resources from policing toward investment in Buffalo’s low-income communities of color.” 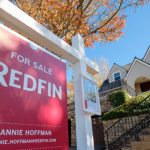 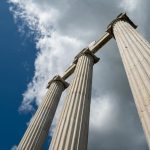 Read the full article from The Spectrum, here.

Taylor, a professor in the department of Urban and Regional Planning, believes Foster’s letter was “right on target.” He and Foster are both executive members of the SUNY Black faculty group.

“I think it shows absolutely no understanding of the challenges that we face at this moment in time and they just oughta stop and give this to somebody that knows what they’re doing or talk to somebody that knows what they’re doing because it’s been pathetic,” Taylor said. “You know, this university has been backsliding in a lot of areas as it relates to race and class.” 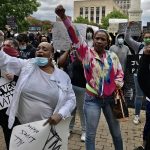 ‘It was never just about Floyd’: Protests reflect anger over inequality, neglect

“Taylor, of the Center for Urban Studies, said he does see hope for structural change this time, of the type that Buffalo’s black community didn’t get in 1967. A broad, diverse coalition of activists has mobilized around Buffalo’s inequities, he said: not only in the criminal justice system, but in neighborhood development, housing and education.” 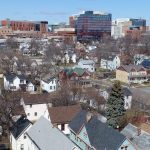 “How Do We Get More Power?”

India Walton signed the lease: $1,200 a month for a modest, gut-renovated one-bedroom, $200 less than the listed price because she had her own appliances. Still, says Walton, “in this neighborhood? $1,200 was unheard of.”

At least it used to be. After decades of disinvestment and neglect, the Fruit Belt was beginning to boom.

The catalyst was right next door: a rapidly expanding medical complex, staffed by a growing number of doctors, nurses, and technicians looking for a nearby place to live.

In many ways, it was a familiar story: an African American neighborhood, long neglected by the city, suddenly deemed “desirable” and, in turn, overrun by new, more expensive development. But the story of the Fruit Belt, so named for the orchards planted there in the 1800s [PDF], went in an unexpected direction. As the medical campus grew, the small, sloping neighborhood sitting in its shadow—whose black population boomed following World War II—decided that its fate had not yet been sealed. 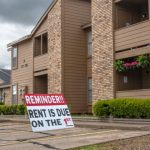 Henry Louis Taylor, Jr., a professor of urban and regional planning at the University of Buffalo, is featured in an ABC News article about the ongoing risk of mass evictions as the country’s millions of renters collides with tens of millions of new unemployment claims across the country.

Taylor said that “federal and statewide eviction moratoriums are based on COVID-19 timetables that are ‘too short’ and don’t consider predictions from medical experts that the pandemic could persist into the fall and beyond, as public health officials have suggested,” according to the article, written by Deena Zaru. 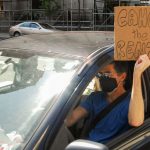 ‘Mass evictions’ on the horizon as US confronts coronavirus housing crisis: Advocates

The first of the month is daunting for many low and middle-income Americans who will be struggling to pay their rent for the second time since the coronavirus pandemic essentially shut down the U.S. economy.

More than 30 million Americans have filed for unemployment insurance since the COVID-19 crisis hit the U.S. in March, and despite a range of temporary federal and state eviction moratoriums, some Americans are still being served eviction notices amid a public health crisis that requires many people to stay at home.

Henry Louis Taylor, Jr., a professor of urban and regional planning at the University of Buffalo, said that federal and statewide eviction moratoriums are based on COVID-19 timetables that are “too short” and don’t consider predictions from medical experts that the pandemic could persist into the fall and beyond, as public health officials have suggested. 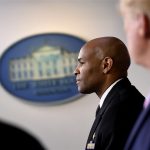 For Dr. Henry Louis Taylor, Jr., a University of Buffalo professor and researcher, there isn’t much of a controversy. The surgeon general missed the mark. And it’s not what he said, but what he did not say.

“It is irresponsible to talk about the elimination of drugs and alcohol without talking about eliminating the neighborhood-based social determinants that produce drug and alcohol abuse,” Taylor told NBC News.

The ‘step-up’ question does not reflect the realities of black America. It suggests that African Americans themselves are responsible for their plight.

“The Adams statement is, at best, irresponsible and, at worst, reflective of systemic structural racism,” Taylor added. “Black people live under enormous stress in places that are service deserts that lack gyms and are not suitable for jogging or even walking. At the same time, alcohol and tobacco companies target these communities. The ‘step-up’ question does not reflect the realities of black America. It suggests that African Americans themselves are responsible for their plight.” 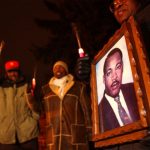 As nation honors King, some local governments ignore the holiday

“It’s a battle over symbolic messages,” said Henry Louis Taylor Jr., a University at Buffalo professor who studies race and class issues and urban affairs. “The holiday is a symbol and a message that is connected to it. Resistance to that holiday is opposition to that message and everything that it is about.”

The effort to make King’s birthday a national holiday began days after the iconic African American civil rights leader was assassinated in 1968, according to an account from the History channel.