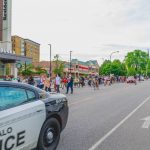 In the past three years alone, Buffalo police have killed four young men of color under questionable circumstances.

Read the full article from The Nation, here.

According to activists circulating a petition demanding his immediate resignation, [Mayor] Brown has never demonstrated an inclination to change the way police operate.

In fact, those activists say, the opposite is true. Under three police commissioners named by Brown in his 14 years as mayor, the department has instituted policies embodying the specific brand of racism that fuels protests across the country.

§ Setting up police checkpoints in poor, mostly black and Latino neighborhoods, which were discontinued after their constitutionality was challenged in a lawsuit.

§ Creating special units with a reputation for brutality and disregard for the Fourth Amendment.