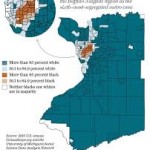 Buffalo Niagara remains one of the most segregated metro areas, but the new federal housing rule intends to change that

Most poor African-Americans live in cheap rental housing in neighborhoods such as Buffalo’s East Side because that’s all they can afford, Taylor said.

To combat that, the federal government should offer more subsidized housing vouchers and encourage housing development, both public and otherwise, in all sorts of neighborhoods, Taylor said.”