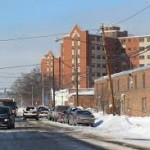 It’s the biggest possible city site for a new Bills stadium, just to the east of the Buffalo River, with a north end zone aimed at the downtown skyline.

Yet it has stirred a hornet’s nest of potential opposition from two neighborhoods, one predominantly African-American, the other overwhelmingly white.

The South Park stadium site, identified in a state consultant’s report last month, would tuck a football palace in the vast triangle formed by the river, Louisiana Street and north of South Park Avenue.

But the larger development footprint surrounding the possible stadium site – defined by a zigzagging boundary line that looks like a gerrymandered congressional district – identifies the Commodore Perry Homes, as well as a prominent business strip along South Park Avenue as possible sites for redevelopment. And the stadium itself would swallow a popular waterfront park.

Not surprisingly, you’ll hear a lot of not-in-my-backyard, or NIMBY, sentiments from both public housing advocates and those who would like the Old First Ward to remain, well, old.

Even though the state stadium study does not include a call for demolition of any homes, residents fear that the ominous red “D” on the state’s stadium map – which stands for potential development sites – really spells death to their neighborhoods.

“When folks come to take your homes, whether you’re black or white, middle class or poor people, you’re all in the same boat,” said Sam Smith, chairman of a residents’ council representing city housing tenants. “They always choose the path of least resistance. We’re all looked at as something that’s in the way of so-called progress.”

Several sources said that opinion of the possible stadium site is much more mixed in the Old First Ward, with many thinking the facility would be a boon to the neighborhood.

But then there are loud voices such as that of Julie Cleary, who lives on Hamburg Street in the ward, a few blocks east and south of the proposed site.

‘A loss of our homes’

“It would mean a loss of our homes, our neighbors and our church, which is most important to all of us,” said Cleary, a key player in defeating the proposed move of the Buffalo Zoo to the riverfront many years ago.

“It would be the end of our way of life.”

Truth be told, though, that’s not what the stadium site map spells out.

The yellow border on the site map – which swallows up the Perry projects and the South Park Avenue home of prominent businesses such as Mazurek’s Bakery, Carbone’s Pizza & Subs and Adolf’s Old First Ward Tavern – merely indicates the areas that could be affected by the stadium, said a source who was involved in the development of the state stadium report. It does not mean that all, or even any, of the buildings within the yellow line would come down.

In fact, none of the three proposed downtown stadium sites requires the taking of any homes, said the source – who added that other potential sites were rejected precisely because they would require the demolition of housing.

“It doesn’t mean they’re going to have to go in there and plow it all out,” Franczyk said. “It doesn’t mean (that South Park business strip) is scheduled for removal, and it shouldn’t be.”

Still, advocates for the residents of the Perry Homes look at the stadium plan and see the end of a neighborhood that was the childhood home of many current city leaders.

“People have been living there for years and years. The South Park District is an old established district with a lot of history, and all of it would be gone.”

Henry Louis Taylor Jr., founding director of the Center for Urban Studies at the University at Buffalo, predicted that the South Park site for a stadium would displace at least 1,000 to 1,500 residents, most of them in the Perry Homes.

“You’re not just displacing people,” Taylor said. “You’re destroying communities, including the social networks people make to help them survive in the city.”

Others, though, said the Perry housing – parts of which date from the 1930s – are doomed, regardless of whether the stadium is built in the neighborhood.

“Perry, as we see it, is not going to remain,” Franczyk said.

Franczyk noted that the projects’ towers, with their dimly lit hallways, are not an inviting living environment.

“You look up at them, and a lot of them are boarded up and vacant,” she noted.

Kelly, like other First Ward community leaders, is strongly opposed to the South Park stadium proposal. But both she and Franczyk said opponents appear to be outnumbered in the neighborhood. Kelly said many neighborhood residents work at First Niagara Center and see a football stadium as bringing more employment to the neighborhood.

“I would say the neighborhood in general is very excited about the possibility of the stadium,” Kelly said.

But it shouldn’t be, she quickly added.

“This effectively would cut the neighborhood off from the waterfront again,” said Kelly, who also noted the possible impact of a stadium on a wide range of neighborhood businesses.

More than anything else, opposition in the Old First Ward appears likely to come from those who want to preserve Father Conway Park, a heavily used green space that falls within the footprint of the proposed stadium site. But the issue is larger than that, said Peg Overdorf, director of the Valley Community Center.

“I don’t want my neighborhood to be the backdoor of a stadium,” she said. “I don’t want to live in a sea of parking lots.”

But the source who was involved in drawing up the report said there may be ways to save parts of Father Conway Park, or move it.

And Franczyk – who fought for passage of a Council resolution calling for the stadium to be located in the city – stressed that a stadium consultant’s report doesn’t necessarily mean that a stadium, even if it’s built at the South Park site, would lead to the dire consequences that some are predicting.

If something concrete is proposed that concerns the neighborhood, Franczyk said, “let’s talk about it.”

Taylor, a longtime Bills season-ticket holder, believes that the Bills can copy what the Atlanta Falcons ownership is doing.

In Atlanta, the Arthur M. Blank Family Foundation, has committed $15 million toward developing the Westside neighborhood near the new stadium.

The UB professor would like to see Bills owners Terry and Kim Pegula make a similar commitment here.

“They should put aside a significant amount of resources to expressly address neighborhood development in and around the stadium,” he said.

Taylor, who has done research on distressed urban neighborhoods and the redevelopment of shrinking cities, is concerned about the current residents of the area if a stadium is built on the South Park site.

‘There can be synergy’

“Economic development doesn’t have to overwhelm and drown social development,” he said. “There can be synergy between the two.”

And the loss of green space such as the park also would hurt the community, Taylor said. There aren’t many green spaces for African-Americans to exercise and work out in that part of the city, and that’s crucial, in his view, because of the high levels of respiratory problems, including asthma, among blacks living there.

Cleary, from the Old First Ward, had the same reaction, about the possible loss of Father Conway Park at the South Park site.

“That’s out of the question,” she said. “That’s as sacred to us as our homes.”